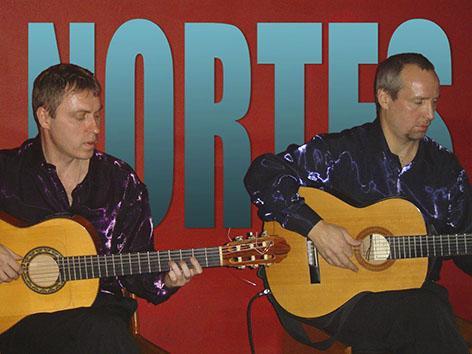 About the project Nortes is an instrumental guitar music, the stylistic direction of which can be attributed to Guitar New Age and Lounge. It is also worth mentioning following the styles of Rumba Flamenco and Gipsy Rock, the founder of which is the famous band Gipsy Kings, who inspired many musicians to play Spanish acoustic guitars.
Nortes was formed in 2007 by two guitarists. The idea of its creation arose during the recording of the album “Lost Illusions”, the implementation of the accumulated material over several years.
Prior to that, the musicians performed in clubs in St. Petersburg with a program repertoire, mainly Spanish and Latin American music in such groups as Los de La Plaza and La Via. These were vocal and instrumental groups, but the musician wanted to give more importance to the guitar, to bring it to the fore in order to show the beauty of its sound. Naturally, this resulted in the creation of the instrumental album Lost Illusions and the birth of a new group, Nortes.
We invite you to listen to this album and enjoy the sound of the Spanish guitar.

Release of the album Lost Illusions by NORTES